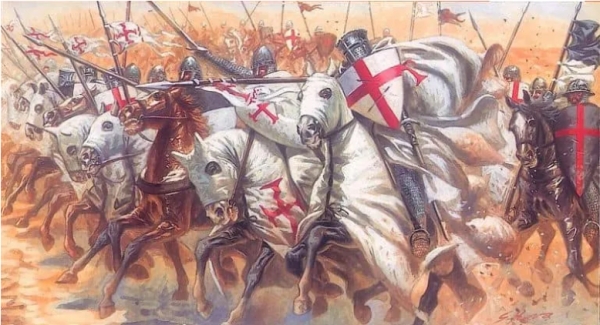 About the Knights Templar

Who and What are the Knights Templar?

The Knights Templar is a Christian-oriented fraternal organization that was founded in the 11th century. Originally, the Knights Templar were laymen who protected and defended Christians traveling to Jerusalem. These men took vows of poverty, chastity and obedience, and were renowned for their fierceness and courage in battle. Today, the Knights Templar display their courage and goodwill in other ways. They organize fund-raising activities such as breakfasts, dinners, dances, and flea markets. They support Masonic-related youth groups and they raise millions of dollars for medical research and educational assistance. Currently, Templar membership consists of people from all walks of life, including doctors, lawyers, clergy, businessmen and entertainment personalities, all of whom profess a belief in the Christian Religion.

Three Levels of The Knights Templar

Order of the Red Cross

As the first step in a Commandery of Knights Templar, the Illustrious Order of the Red Cross continues the story of the Royal Arch and deals with a period in Jewish history at the time of the return of the Jews from captivity and the efforts to rebuild the Temple of their God in Jerusalem. The Illustrious Order of the Red Cross, peculiar to the United States, teaches the lessons of the triumph of Truth.

Order of Knight of Malta

The second Order in the Commandery is the Knight of Malta with its pass degree of Knight of St. Paul or the Mediterranean Pass. This Order is the first Christian Order encountered by the candidate. The ritual is based historically upon one of the old Orders of the Crusades.

Order of the Temple

This is the third and most impressive Order of the Commandery and is wholly Christian. The Templar tradition derives from the Society of the same name which played so important a part in the Crusades of the Middle Ages. Beautiful lessons of the death and ascension of our Savior are inculcated and the candidate is received into full fellowship, in the most solemn manner.

How Do I Become a Knight Templar?

To become a Knight Templar you must first become a Master Mason in good standing in a regular Masonic Lodge. The catch words "To be one, ask one" applies in the case of a man who is not a Mason. Any Master Mason is free to ask any York Rite Mason about membership. There should be a Brother Mason in your Lodge, who is also a York Rite Mason, you can talk to. The road to becoming a Knight Templar includes becoming a Royal Arch Mason and a Cryptic Mason. You will receive symbolic teaching that will greatly enhance and supplement the moral teachings of the Symbolic Lodge.